Late modern can be an expression that are used to make a point of the fact that when society or projects in the social, fails, (…)

The artist Donald Judd disagreed with the idea of art being an object that could be transferred from museum to museum and shown in continually different contexts without losing meaning.

The late points at ideas that are already proven wrong, and that we know are a failure are still being applied to social and political arguments.

Predictions or ways of thinking

Thinking that questions the museums’ social function, can be “late”, or doomed among artist and curators and directors.

Museum programs, projects, exhibitions and other institutions of the 21 centuries are dealing with discourses on social art and its cultures.

The 15 concrete works that run along the border of the Chianti’s property were the first works to be installed at the museum and were cast over a four-year period from 1980 through 1984.

Each unit has the same measurements — 2.5 x 2.5 x 2.5 meters — and thus is large enough to enter. Here, the notion that the environment is an integral aspect of the work is taken to another level, where each box is both a permeable space as well as a monolithic whole.

The neutral color of the concrete combines with the earth tones of the Texas plain, and the industrial nature of the forms seem intrinsically related to the abandoned air force base on which they are placed.

Inspired, as well, by the Missouri landscape in which the artist was raised, these structures grow naturally out of both Judd’s Minimalist aesthetic and from his early childhood years. In this work, he has achieved a full integration of form and space, art and environment.

“LB / DF – LOW BUDGET / Discursive Furniture” is an independent publication or “artist’s book” about the workshop “LOW BUDGET / Discursive Furniture”, – a furniture workshop that was produced on behalf of OCA Norway (Office for Contemporary Art), appropriating a postmodern free design / lifestyle-concept in 2003 – ’04. The design of the furniture, adopted from a post-’68 idea-book published by the Danish publisher and lifestyle magazine Bo-Bedre, follows the design and color, instructions and documentation of the furniture as they were originally reproduced in the original publication from Bo Bedre. The furniture is owned, and is still in use, (as far as I know) by OCA Norway at their exhibition and project room at Grünerløkka in Oslo. 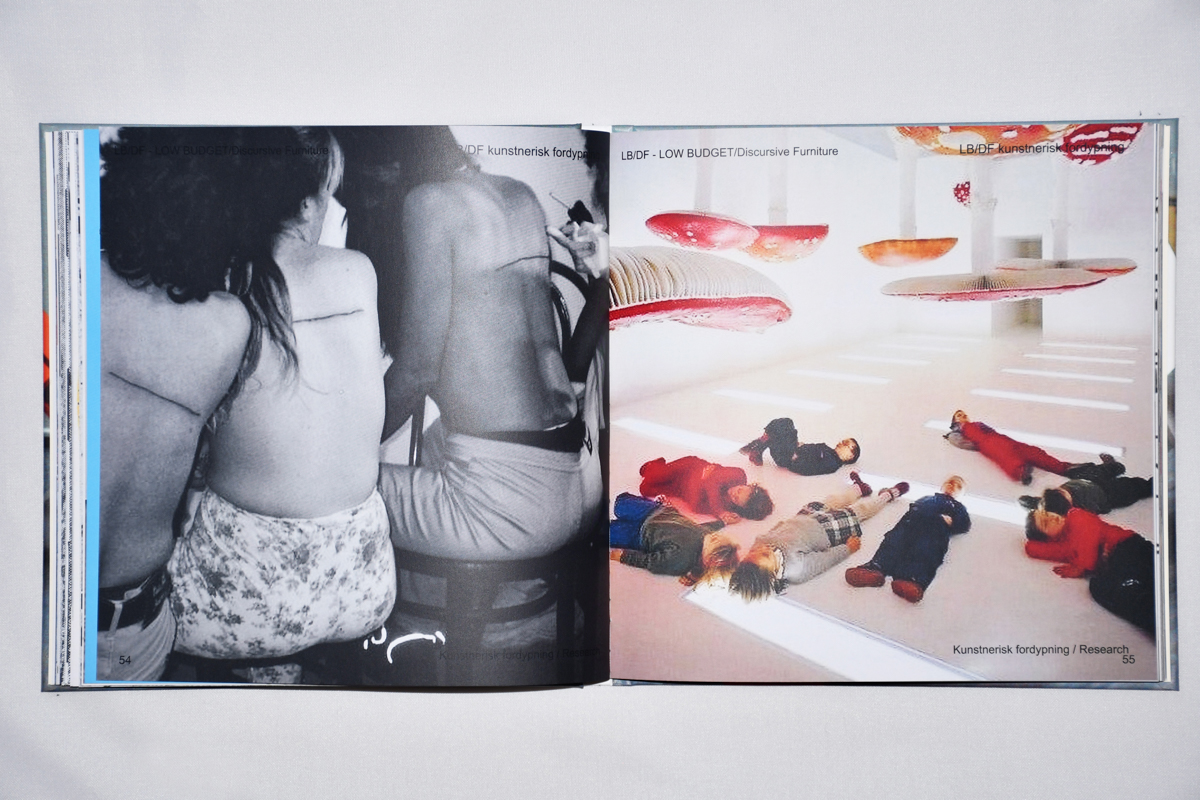 Postmodern aesthetics and DIY
-The workshop’s conceptualization and the furniture’s examination of postmodern aesthetics and of DIY culture are aesthetically and culturally an example of a relational aesthetics. The furniture relates to a social turn in social art and design at the turn of the century and refers to an artistic response to a historical avant-garde that addresses themes such as globalization; including “a flow of information” and “a notion of fragmentation”. According to Peter Osborn, its «tendency to identify a break with the dialectic of historical and neo-avant-gardes at precisely the point at which it reimposed itself most intensely, moving to a new stage of development». This implies “An art of institutional critique”, or “the function of functionlessness itself”.

Form and design lab
The workshop LB / DF is developing more research on social art and design and
the postmodern free-design concept from the furniture production and workshop at ISP OCA in 2003-’04 is re-conceptualized in the continuation of the project in a new 2017 redesign.

ABCD 9 ROW is an artwork by the american conceptual artist Sol LeWitt.

Sorry for not blogging this month… Tech support!

Hate crime and hacking is illegal. That means that personal opinions that are not related to the subject or content of this site, should not be projected on its content. Journalists engaging in various topics not related to the problems and topics on this site should not use it as a spring board or source of information, and/or inspo.

The definition as used above includes unmotivated gossiping and cyber punk, bias and other political or culturally motivated reasons for hacking, misinterpreting and other biased/colored interpretation of the content on this site, or/and other personal profiles online (or offline).

That includes also intermedia, social media, and how these are used.